The crowds answered, “This is Jesus, the prophet from Nazareth in Galilee.”

1. What animal did Jesus ride on into Jerusalem?

2. What did people wave in the air as Jesus rode into Jerusalem?

3. What empire ruled Judah at the time of Jesus’ death?

A: The Roman Empire

4. Who was the other man that Pilate offered to release?

Palm Sunday marks the beginning of the last week of Jesus’ life. On that day, Jesus entered Jerusalem riding on a donkey. People began to throw down their cloaks and wave palm branches. They sang and danced as Jesus enter the North Gate. They saw him as the prophet and miracle worker who raised a man from the dead! They hoped that Jesus would kick the Roman rulers out and rule over Judah, just like his ancestor King David did many years before.

The religious leaders saw Jesus as a huge threat that had just entered the city. As the week continued, these leaders hated Jesus even more. By Friday, they had arrested and tried Jesus. A new crowd saw him in chains, alone, beaten and kneeling before the Roman ruler, Pontius Pilate. This crowd saw him as a troublemaker who had challenged the Jewish leaders’ rule and the authority of Rome. Pilate tried to release Jesus, but he gave in to the angry mob and sentenced Jesus to die.

All that week, people in the crowds, the Jewish leaders, and the Roman authorities kept asking, “Who is Jesus?” Rebel? King? Threat? Troublemaker? Their answers led to Jesus on the cross. When people ask you, “Who is Jesus?”, what is your answer?

There are seven “I am…” statements that Jesus taught about himself. Choose one and draw a picture for it, and then write the verse underneath. You could even do them all and learn seven important verses about Jesus. What did you learn about Jesus?

2. “When Jesus spoke again to the people, he said, ‘I am the light of the world. Whoever follows me will never walk in darkness, but will have the light of life’” (John 8:12). 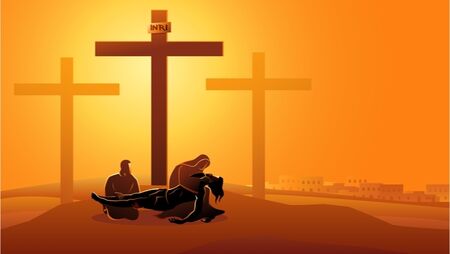