Surely the Sovereign Lord does nothing without revealing his plan to his servants the prophets.

1. What was the main job of a prophet?

A: A prophet was someone whom God used to communicate his message.

2. True or False. God chose many different types of people to deliver his words to his people.

A: Prince of Peace

5. True or False. There were no prophets in the New Testament.

Isaiah, Jeremiah, or Ezekiel? Have you tried to read parts of the fifteen Bible books of the prophets? They can be very hard to understand because of the poetry and strange imagery. Yet, these books are very important parts of God’s big story.

Prophets were Israelites whom God sent out to speak on his behalf. They often started speaking to the people saying “Thus says the Lord.” What they talked about most often was what God cared about the most: his relationship with his people. In Genesis 17:8, God made a special promise called a covenant. This covenant made a mutual partnership where God commanded Israel to be a nation of justice and faithfulness. Israel would show other nations how to follow God. Unfortunately, Israel and its leaders broke God’s covenant again and again. And that’s where the prophets came in. They reminded the people to stay faithful to their promises to God. They did this in three ways.

During the time of the prophets, God’s people didn’t want to be reminded of their sins. They didn’t want to be told to change their ways and follow the Ten Commandments. The people didn’t listen to the prophet’s warnings about punishment until it was too late. Then they listened and heard the messages of hope that God would save his people and the Messiah would come.

Today, you and I might not want to hear about our sins. We might turn our backs to God. Still, God is faithful and full of mercy. He loves us so very much and forgives our sins when we ask. Prophets also spoke about the Messiah returning one day to establish his kingdom, one that will last forever. That’s a wonderful promise for us from God, and God will always keep his promises. 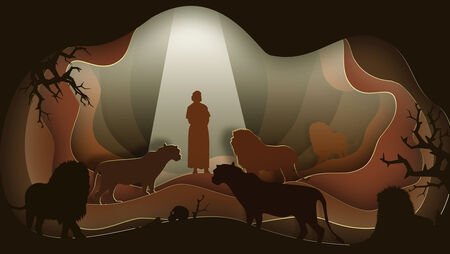 Daniel and the Lions' Den