2. Remember the story of Noah and the ark? Did you know that when God told Noah to build the ark, it had never rained before? God said he was going to send a flood, but Noah had never seen a flood. The Bible says, “he was warned about something that had not yet happened” (Hebrews 11:7). If Noah had relied on his own judgment, he might have said, “A flood? There’s no such thing! I don’t need a boat.” But Noah believed God and build the boat, and he and his family were saved. He believed God, and then he did what God told him to do. Think about what it means to trust God instead of your own judgment as you listen to today’s episode.

“With all your heart you must trust the Lord and not your own judgment. Always let him lead you, and he will clear the road for you to follow”

1. Why did Liz feel like a failure rather than a hero?

A: Because he needed to be rescued rather than being the rescuer.

A: Another note. “A hero may doubt himself, but fully trusts in God.”

3. Who started talking in Shizzle-speak?

4. What did Liz and his friends find when they arrived back in Terrene?

A: The Mayor had planned a special welcome-home celebration to celebrate Liz.

5. What did the final note to Liz say?

A: Who wrote the notes?

In this episode, Liz didn’t feel like a hero because he was the one who was rescued. But he discovered that he was a hero, because he did what he believed God wanted him to do.

Do you know what it means to be humble? It means not thinking you’re better than anyone else. In Psalm 25:1-9, David says that the Lord will “lead humble people to do what is right and to stay on your path.” He’s confident that the Lord will lead him because, as he said, “I offer you my heart, Lord God, and I trust you.” David knew that if he trusted God and didn’t think his own judgment was right, that God would “show the right path.”

It's time to finish up your cape from the last episodes and add one last symbol! Today Liz learned that true heroes keep God at the center of their lives. Design a symbol that shows that God is the center of your life. Be creative! Try out a few designs before you choose one. You can draw it onto a paper cape, or if you have a fabric cape, you can use fabric markers or cut out your design on paper and pin it to your cape. If you have a fabric cape, put it on to feel heroic! If you have a paper cape, display it somewhere that will remind you that true heroes trust in God. 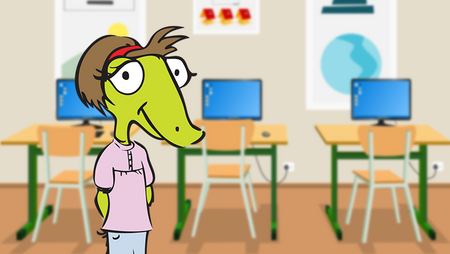