1. Exodus 20:17 tells us not to “. . . want anything that belongs to someone else. . . “ Wanting what other people have is called coveting. Why is this wrong? How can it hurt you and others?

2. Daniel 6 tells about King Darius. He chose Daniel and two other men to be in charge of his kingdom . Daniel did a great job, and Darius planned to put him in charge of the whole kingdom (under only the king himself). The other men were jealous of Daniel. They wanted to be in charge. They tried to find something wrong with Daniel so they could get him in trouble, but they couldn’t. So they convinced the king to make it illegal to worship God. Daniel loved God and refused to stop praying. The men caught him praying and told the king. Darius had to obey his own laws, so he had Daniel thrown in a den of lions. God protected Daniel. Darius was glad that Daniel lived. And Darius was angry with the other men—so angry that he threw them in with the lions. As you listen to this episode, think about the different things that we want that belong to others.

“Do not want anything that belongs to someone else . . . ”

1. What video game did Liz want?

2. Why did Liz stay at Spike’s house?

A: His parents had to go out of town to take care of his Grandpa.

A: He let Spike do what he wanted, and ordered pizza every day for supper.

4. Why was Liz disappointed in Spike’s dad?

A: He didn’t take time to talk and pray with him about his Grandpa.

In this episode, Liz discovered that things aren’t always as good as they look at first.

Sometimes life works out so that we have pretty much everything we want. Other times, everything seems to be going wrong. The Lord doesn’t want us to be happy or sad based on what we have in this world. Instead, we should always rejoice because of what we have in Jesus Christ. No matter how hard our lives are, or how few “things” we have, we can know that we will be spending eternity in heaven with Jesus if we’ve trusted in him.

The apostle Paul wrote about this when he was in prison. He told the Christians in Philippi that he was rejoicing even though his life was hard. He said he had learned how to be content (happy and at peace) no matter what was going on (Philippians 4:11-13). If Paul can feel that way in prison, you should be able to feel that way too.

Write down a list of 10 things you want to get or do. Then go down the list and decide whether your wanting has become coveting. Are there things that you want so badly that they are distracting you from more important things? Are you jealous of what others have to the point where you are a little bit angry with them? Wanting what others have can keep you from worshiping God and relying on him. It can ruin friendships. It can keep us from helping others. God wants you to trust him with your needs and desires. 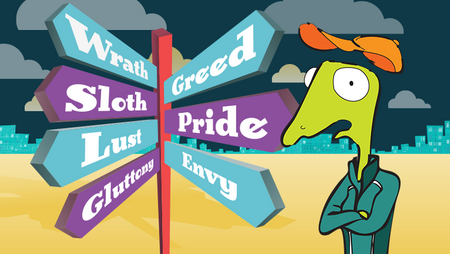