Theme: Not Judging Others.

1. Luke 6:37 tells us not to judge others. Is it okay for us to have opinions about how other people act?

2. 1 Samuel 1 tells the story of Hannah, a woman who desperately wanted a baby. Her husband Elkanah had another wife who made Hannah’s life miserable. One day Hannah was in the Lord’s house. She was praying to God, and “her lips were moving but her voice was not heard” (vs. 12). Eli the priest saw this and judged her, and he said to her, “How long are you going to stay drunk? Put away your wine” (vs. 14). Hannah was quick to explain herself to the priest. When he realized he had made a mistake, Eli blessed Hannah, saying “Go in peace, and may the God of Israel grant you what you have asked of him”(vs. 17). Later Hannah and Elkanah had a son named Samuel, whose name means “Because I asked the Lord for him” (vs. 20). As you read this episode, think about times when you have judged other people.

“If you do not judge others, then you will not be judged”

1. What was the name of the family who owned the lunch box that Liz and Lucille found at the park?

2. Why did Liz and Lucille not want to return it to them?

A: Because they were different.

3. What was it like when they got to the house?

4. What did they discover when they ate dinner with the family?

A: That, like Liz and Lucille, they were Christians.

In this episode, Liz and Lucille were quick to judge a family based on what they wore and what their hobbies were. But think about it: wouldn’t the world be dull if everyone looked, acted, and dressed the same? Remember that every person is created in the image of God, and every person has a soul that God loves. Don’t judge someone because of his or her outward appearance when the Bible says God looks at the heart (1 Samuel 16:7). Does he or she have a love for the Lord? Then don’t hold back the love God commands us to give to others (Matthew 22:37-39) just because they’re different from you. When we only spend time with people who are just like us, we feel safe and comfortable. But maybe a little bit of discomfort is exactly the push we need for us to depend on God and reach out to others, especially those who are different. 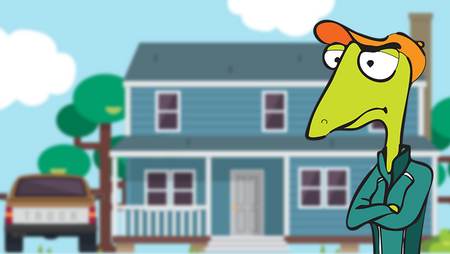