2. In 2 Samuel 28, King David was waiting eagerly to hear how his army was doing in a far-away battle. In verses 24-30, David saw a runner coming from the battlefield to tell him, “We won! We won!” That runner was called an “evangelist”—someone who brings good news. That term is now used for someone who tells others the good news about Jesus. The news is the same: “We won! We won! Jesus died to make us right with God!” As you listen to this episode, think about how it feels to bring people good news.

“Go and preach the good news to everyone in the world”

1. Who first introduces Lucille to My Gecko?

2. Why did Mrs. Trollscales invent My Gecko?

A: To have an easier time talking to other lizards.

3. Who did Cole forget to invite to the radio studio?

4. What does Lucille want to do with My Gecko?

A: She wants to use it to spread the news of Jesus' love with others.

In this episode, Lucille finds the best reason of all to join the Gecko craze: sharing the gospel!

Imagine that everyone on the planet, including yourself, became sick with a life-threatening disease. What if you discovered a medicine that cured you and could heal everyone else as well? Would you stay quiet and keep what you knew about the medicine to yourself? Hopefully you said no! If you care about other people, you would want to share the cure with the whole world. Well, everyone's heart is very sick with a life-threatening disease called sin: the desire to do what we want instead of what God wants. Without the "medicine" of the gospel—the good news that Jesus loves us, died for us, and saves us from sin if we truly follow Him—we will be destroyed by this disease.

Today it’s estimated that there are over two billion people in the world who haven’t heard the gospel yet. God loves each and every person, and he wants his followers to keep spreading this life-saving good news. Jesus told his disciples to "Go into all the world and proclaim the gospel to the whole creation." If you are a follower of Christ, these words apply to you!

Do you know how to tell someone about God’s plan of salvation? It’s good to review so you’re ready whenever you have the chance. Write down the steps, or draw pictures if it helps you remember.

That’s the gospel: the good news of God’s rescue plan for us! 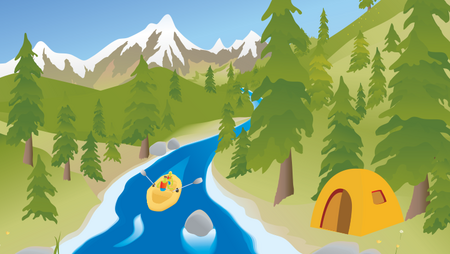 Get Out of Line