Theme: God's presence and care are always with his children.

1. Psalm 139:8 says, “If I go up to the heavens, you are there …” In this verse, the word “heavens” means the sky and space and the universe. How big is the universe? What do you think it means that God is there, even in the farthest places in space?

2. Paul and Silas traveled around telling people about Jesus Christ. In one town they made some evil men angry (Acts 16:16-39). These men grabbed Paul and Silas, took them to the police, and told lies about them. Pretty soon a large crowd gathered. Paul and Silas were beaten and had all their clothes torn off, then were thrown into a prison cell. They were guarded closely by the guards and put in stocks (wooden platforms that were used to keep prisoners from moving). You might think that they were far away from God in that place. But God was with them even there. He sent an earthquake that broke the chains that held them and shook open the prison doors. The guard was afraid that they escaped, but, instead, Paul and Silas stayed and told the man how to be saved. Think about how God is with us wherever we are as you listen to today’s story.

“If I go up to the heavens, you are there; if I make my bed in the depths, you are there. If I rise on the wings of the dawn, if I settle on the far side of the sea, even there your hand will guide me, your right hand will hold me fast”

3. Name the lady that they helped.

4. What did Shorty tell Liz and Morrie that they had to do?

A: Stay in the boat.

5. What happened when Liz pulled the branches out of the drain?

A: Liz and Morrie were sucked into the storm drain.

In this episode, Liz and his friends were sent out in boats to help flood victims in Caiman City. They met a stranded lady who reminded them that God is always with them. Liz saw what he thought was the opportunity to be a hero, and so unplugged a storm drain. Moments later, he and Morrie were stuck in the tunnels far underground. They had to trust God to keep them safe.

In Romans 8:35-39, the apostle Paul talked about all the bad things that Christians can face. He explained that no hardship or poverty or natural disaster or war can separate us from the love of Jesus Christ. Notice that he didn’t say we won’t sometimes experience bad things. But no matter how bad things get, God is with us, protecting us from evil. And if the very worst happens and we die, we know that we will instantly be with Jesus Christ (2 Corinthians 5:8).

Dig deeper into God's constant presence with those who trust him in Psalm 23:4; Psalm 31:20; Psalm 142. David was alone and hiding from his enemies in a cave. If David could trust God in those circumstances, you know you can trust God in yours.

Do you have your cape from the last episodes? If not, make one out of fabric or paper. Now it's time to add another symbol! Today Liz learned that true heroes can rely on God, even when they are afraid (yes, heroes get scared sometimes). Design a symbol that shows that God is always with you. Be creative! Try out a few designs before you choose one. You can draw it onto a paper cape, or if you have a fabric cape, you can use fabric markers or cut out your design on paper and pin it to your cape. Leave some room, though, because there are two more episodes to come! 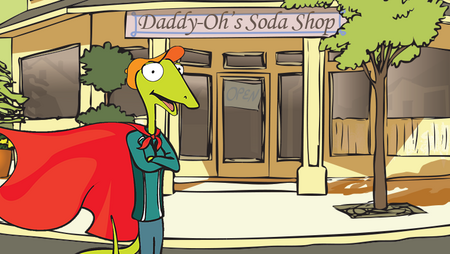 Heroes Part 5: Trust in the Lord