1. Matthew 5:44-45 says, “But I tell you to love your enemies and pray for anyone who mistreats you. Then you will be acting like your Father in heaven.” Jesus tells us to pray for people who hurt us. Why do you think this is so hard to do?

2. The story of Jonah isn’t just about a man and a big fish—it's a story about God's love. Jonah just didn't understand. Nineveh was the capital city of Assyria. The Assyrians were ruthless conquerors and the Israelites (including Jonah!) were terrified of the Assyrian armies. But God told Jonah to go and preach to them and to give them a chance to repent. Jonah would have danced in the streets if God had told him that he was going to destroy the Assyrians. But to bring them a message of warning and hope? Jonah wanted no part of that.

When God told him to go to the city of Nineveh and let the people know that God saw their great sins, Jonah ran away. Why? Jonah thought that if he warned the people of Nineveh, they just might repent. Then God would be kind to them. Can you imagine being mad at the thought of God being kind to someone else? Jonah believed in God, but he sure had a lot to learn about being a follower of God. As you listen to this episode, think about how to love your enemies.

“But I tell you to love your enemies and pray for anyone who mistreats you. Then you will be acting like your Father in heaven.”

1. Why was Liz happy when Miss Wattle told him that the soccer club may be disbanded?

A: He wanted to be in the club but there wasn’t enough room.

2. What did Miss Wattle ask Liz to do?

A: Tell the soccer club to get their homework done.

3. What happened when he ran away?

4. Who rescued him and told him the story of Jonah?

In this episode, Liz is asked to love some enemies.

As a family, read the book of Jonah from the Bible. Try to read it all the way through in one sitting.

Which is easier: to love a friend or to love an enemy? That's not a hard question to answer, is it? Of course it is easier to love a friend than an enemy. But Jesus turns this upside down when he says, "Love your enemy." Then he even says we are supposed to pray for our enemies! Could you do something like this?

Think of someone you do not get along with. The first step of loving an enemy is to pray for them. Pray for this person all this week. Second, get to know them. Try to find out one thing about them that you didn’t know before. Third, look for an opportunity to do one kind thing for them. For example, you could lend them a pencil, help them with a task or invite them to play with you. There is no guarantee that they will become your best friend, but you are doing what God has asked you to do. 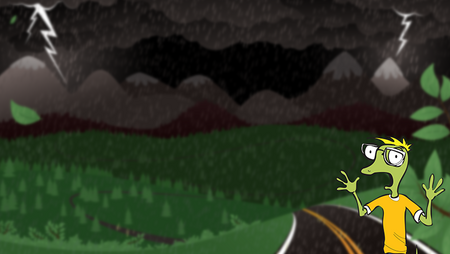