Theme: Doers of the Word.

2. In Matthew 13, Jesus told a story to help us understand the difference between doing and hearing. A farmer was sowing seeds in his field. Some fell on a path and were immediately eaten by the birds. Some fell on the rocks, and plants sprang up, but then withered because they didn’t have strong roots. Some fell in the thorns and produced plants, but they were choked by the weeds around them. Some seeds, though, fell on good soil and produced a very good crop.

“But be doers of the word, and not just hearers, deceiving your own selves”

1. What is the name of the little blue robot Liz meets?

2. Who does the robot work for?

A: An angry mob led by Chamelia

4. What does the Rock of Truth say?

A: When you have nothing

In this episode, Liz has to work through challenges and act on his knowledge.

Our memory verse tells you that God wants more from you than just your agreement. He wants action! It's one thing to agree with what you read in the Bible. It's quite another to do what it says. When you’re just a "hearer" of the word, and you don't let it change your life and your heart, you’re missing the true expectations of God. James says in another passage that faith without works is dead (James 2:14-26). This is what he means. Agreeing with what the Bible says has to be joined with action in your life. Be a doer of the word, not just a hearer!

What is one way that you can put your faith into action this week? To make sure that you do it, tell and friend or family member what you want to do to show your faith. Now, do it! 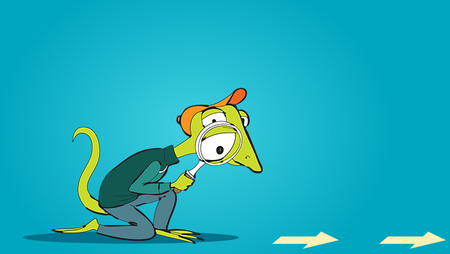