2. In 1 Samuel 17, you can meet the the ultimate Bible bully. He’s the biggest, baddest Philistine soldier and his name is Goliath. He was so full of pride that he believed no one could defeat him in battle. At first, no one dared to fight him. A young shepherd boy named David didn’t like how Goliath mocked the Israelites and made fun of God. Goliath was so prideful that he thought he didn’t even need the Philistine army behind him. He mocked David for coming with a stick and slingshot with some rocks. In the end, God used David to defeat Goliath. Goliath was so big and strong that he thought he didn't need anyone, including the God of Israel. Prideful people forget that everything you are and everything you have comes from God. Being prideful separates you from God. As you listen to this episode, think about how your pride gets in way of your relationship with God.

“When pride comes, then comes disgrace, but with humility comes wisdom”

2. What crashed into Grandpa’s barn during a storm?

3. What play were Liz and his friends rehearsing?

4. What did Liz and Lonesome Chuckwalla have in common?

A: They both had pride and no friends.

5. How did Scooter help Lonesome Chuckwalla?

A: He suggested a way to fix the plane.

Today’s program includes two stories. In the first story, the success of Liz’s play goes to his head. He rewrites the play giving himself a bigger and bigger role. All his friends leave him and the play. Suddenly Liz finds himself successful, but alone. Meanwhile, Lonesome Chuckwalla is getting on Granny Gecko and Grandpa Anole’s nerves. Chuckwalla doesn’t even care about Scooter, who thinks he is a hero. You can see that Lonesome Chuckwalla’s name fits, because his pride makes him a very lonesome character. Pride pushes away people who want to be friends. 1 Peter 5:5-7 tells us that God disapproves of the proud, but gives grace to the humble. Humility gives credit to God and all the people who help us.

Make a list of 50 people who have helped you and are still helping you become the good, strong Christian person that you are and want to become. Some people on your list might be a parent or guardian, grandparent, brother or sister, aunt or uncle, cousin, friend, teacher, neighbor, coach, sunday school teacher, fellow church member or youth group leader. Thank some of these people with kind words or a card. 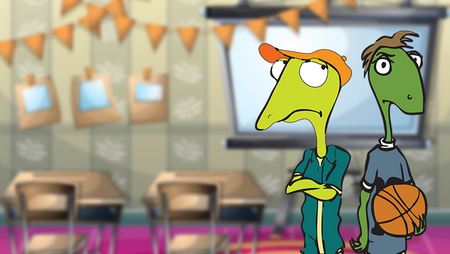 The Good, the Bad, and the Beautiful