1. Proverbs 13:20 says that wise friends make you wise. What does this mean? Can you think of a time when you learned something important from a friend?

2. In Luke 15:11-24, Jesus told a parable about a young man who decided he didn’t want to stay at home with his parents. He asked his dad for all the money that he would inherit and he took off for a far away place. Instead of living responsibly and hanging around with wise people, he got involved with the wrong crowd. Before long, he had spent all his money. None of his new friends helped him out. He was left alone and had to take a job feeding pigs. He found out that the friends he chose were the wrong ones. They only cared about him as long as he could join in their fun. As you listen to this episode, think about how the wrong friends can get you in all sorts of wrong situations.

“Wise friends make you wise, but you hurt yourself by going around with fools.”

1. From what city did Gerald come?

2. What’s the name of the group of mean boys at school?

3. What club does Gerald ask Liz about?

A: The Knights Chess Club.

4. What do Wally and Skink want Gerald to do?

5. What do Wally and Skink use to get Gerald in trouble?

In this episode, new kid Gerald has to decide if he wants to be friends with the trouble-making Iguanas, or with Liz and Lucille.

The apostle Paul warned us about hanging around with the wrong type of friends. There are some people who don’t believe in God and have no interest in obeying him. They claim there is no reason to do good because nothing really matters anyway. Instead of being responsible, they say “Let us eat and drink, for tomorrow we die.”

Paul tells us not to be tricked. No matter how good we are or how good we want to be, if we hang out with the wrong people, we will do bad things. “Don’t fool yourselves. Bad friends will destroy you.” (1 Corinthians 15:33)

Think about yourself and the friends that you hang out with. Are they a good influence on you to help you make wise choices? Make a list of friends who have helped you make a wise choice and send them a note or email thanking them for being good friends. 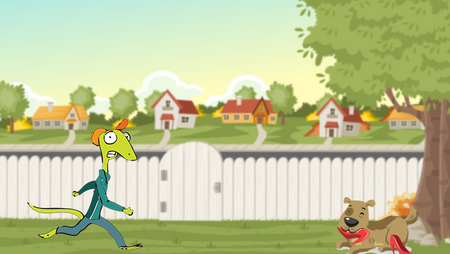