1. 1 Peter 3:15 says, “Always be ready to give an answer to anyone who asks you about the hope that you have.” Why is it important to tell others about your faith?

2. Meet Peter. He was one of Jesus’ disciples and closest friends, and in Luke 22, poor Peter was in the middle of a really scary night. Jesus had just been arrested, and Peter had followed Jesus and the soldiers to the high priest's house. He waited in the courtyard. It was cold that night, but there was a fire, so Peter sat by it. A servant girl noticed Peter and said to him, “You were with Jesus.“ Peter was scared. Almost without thinking, he said, “No, I don't know Him.“ About an hour later, another person said, “You are one of His followers.“ Another chance for Peter. What did he say? Peter said, “No, I'm not.“ Still another person said, “You must have been with Jesus because you are both from Galilee.“ For the third time, Peter denied knowing Jesus by saying, “I don't know what you are talking about.“ At this point, Peter realized what he had done. He left the courtyard and cried. How he must have wished he could “re-do“ his answers. You can read this story in Luke 22:54-62. Think about how Peter felt about missing this opportunity as you listen to today’s program.

1. Who is Liz’s partner for the history report?

2. What does Liz do instead of working on the report?

A: He goes to the movies to see “X-Monsters from the Planet Zenon”

3. Who ends up doing all the work for the report?

4. What are Lucille and Chamy working on?

A: A project for the science fair

5. What does Chamy ask Lucille about?

6. How does Lucille answer?

A: How does Lucille answer?

In this episode, Lucille struggles to share her faith with Chamy.Has anyone ever asked you about Jesus? Some day someone will. Will you know what to say? Would you be ready to tell them about the hope that you have in Jesus Christ? Or will you run away from the question?

What does it take to be ready? It takes two things. First, you must be able to tell about the good news of the gospel. You need to be ready with an explanation of what the Bible teaches about God, sin, salvation, and eternal life.

Second, have a story from your own life to share. Telling how God has made a difference in your life is powerful. It shows your friend that God is personally interested in our lives and loves and cares for us. Think of times that you were aware of God’s help and encouragement. Be ready to share this with someone who asks about the hope you have. When you know God’s story and your story, you can be ready to answer anyone who asks about the hope that you have in Jesus.

Can you tell someone about your hope in God? Think about a time in your life when God helped you. Practice telling your story to your parents. Ask them about their stories, too. Today, try out your answer with your family. If you’ve already thought about it, you'll be able to answer when you’re asked. 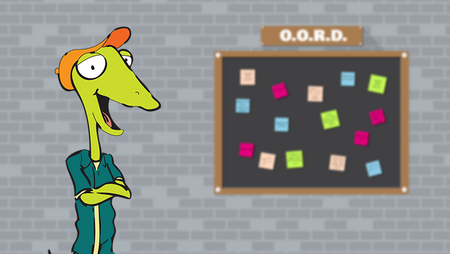 The Order of the Gator