Theme: We believe in the resurrection of Jesus! Easter

1. In 1 Corinthians 15:17, Paul explains that if Jesus did not rise from the dead, then nothing else you believe in matters. So the Resurrection is an important fact of the Christian faith. If someone asked you to prove that Jesus was raised from the dead, what proof would you offer?

2. After Jesus rose from the dead, he appeared to some of his disciples. One disciple, Thomas, was not there at the time. Thomas really wanted to believe it was true, but just couldn’t. He said, “First, I must see the nail scars in his hands and touch them with my finger. I must put my hand where the spear went into his side. I won’t believe unless I do this” (John 20:25). Jesus understands that sometimes people need proof. He appeared to Thomas the next week, and allowed him to touch his wounds. Thomas believed because he saw. Jesus told him, “Thomas, do you have faith because you have seen me? The people who have faith in me without seeing me are the ones who are really blessed” (John 10:29). As you listen to this episode, think about a time you really wanted to believe something, but still needed proof. Did you need to see for yourself, or did you trust what other people told you?

“Unless Christ was raised to life, your faith is worthless, and you are still living in your sins”

1. What was Liz’s challenge to Chamy?

A: He challenges Chamy to offer proof that the resurrection is not true.

2. Who do Liz and his friends meet when they find themselves in Capernaum?

A: Jairus and his daughter.

3. What happens to the girl that makes her and her father believe in Jesus’ resurrection?

A: Jesus raised her from the dead.

In this episode, Liz and his friends travel back in time and see the events after Jesus’ resurrection. The resurrection is a central part of God’s rescue plan for us.

Many have tried to explain away Jesus’ resurrection, but he did rise from the dead. In addition to the evidence that was shown in this episode, Jesus spent forty days after his resurrection talking to people! Paul wrote that Jesus appeared to more than 500 fellow Christians—many of whom were still alive at that time to testify (1 Corinthians 15:6). More than 500 witnesses said Jesus was indeed alive!

Many of those people were completely changed by knowing that Jesus was alive. James was Jesus’ half-brother . He did not believe that Jesus was the Messiah …until after Jesus appeared to him. James then became a major leader of the Christian church. Paul hated everything to do with Jesus; he even hunted Christians down…until he met Jesus. For the rest of his life, Paul traveled the world preaching and writing letters proclaiming that Jesus is alive! The disciples were so afraid the night Jesus was arrested that they ran. They weren’t brave, they weren’t bold at all…until after Jesus rose. For the rest of their lives, they boldly proclaimed the good news of Jesus’ salvation to everyone. Only a truly living Jesus could inspire such a huge change in these men!

Jesus died for your sins. That is an amazing thought! Take a blank piece of paper and cut out a cross. Then, using paints, washable markers, or a washable ink pad, color your thumb and make a thumbprint on the cross. As you do, think about one of the sins that Jesus took on for you! Repeat with another color. As you fill your cross with colorful prints, think about all the sins Jesus has taken care of for you and how very much he loves you—so much that he was willing to die on the cross for you! Once your cross is beautifully colored, print the word “Jesus is alive! He loves me!” Display your cross where others will see it. Share this wonderful story with one or two (or more!) other people. 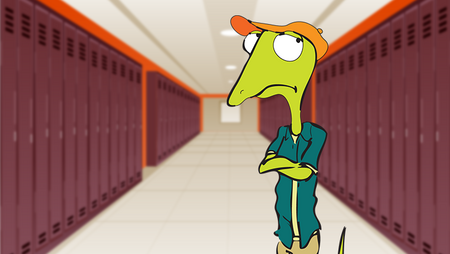