1. Proverbs 10:4 says that laziness leads to poverty. What is laziness? Is this verse about money?

2. In Matthew 25:14-30, Jesus told a parable about responsibility. A rich man went on a journey. Before he left, he called his three servants. He gave one of them five bags of gold to take care of. Another got two bags, and the third got one bag. While the master was gone, the servant with five bags invested the money and made five more bags. The servant with two bags did the same and gained two more bags. But the servant with one bag dug a hole and buried the gold. When the master returned, he was very happy with the first two servants and gave them more responsibility. But he was unhappy with the servant who buried his gold. He kicked him out of his service with nothing. As you listen to this episode, think about what it means to take responsibility.

1. What did each person called to testify tell the judge?

2. What did Granny place in her yard to teach the kids a lesson about “It’s not my job”?

3. What did Scooter find under a rock?

4. Who did Grandpa assign to take care of his garden while he was gone.

5. Who got a reward when Grandpa got back, and why?

A: Lucille and Morrie, because they took care of their gardens.

In this episode, Liz and his friends put on a three-act play to teach about responsibility.

God has done so much for us. He created us. He sent his son, Jesus, to die for us. He saves us from the punishment for our sins. As a way to show our thanks to him for all he’s done for us, we want to honor him. We do this by taking responsibility to live a life pleasing to him.

Get two jars and a supply of something small, like candy pieces, coins or small rocks. Put a strip of tape on each jar. On one jar, write “Responsible.” On the other jar, write “Not so much.” Over the next week, ask your parents to tell you when they think you’ve been responsible and when you haven’t. When they say you have been, put an item in the “Responsible” jar. When they say you haven’t, put an item in the “Not so much” jar. At the end of the week, see which jar is fuller. If your “Not so much” jar has more items, ask the Lord to help you become more responsible. 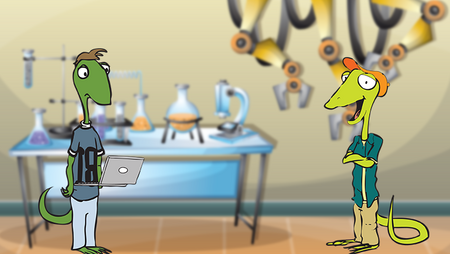