The woman said, “I know that Messiah” (called Christ) “is coming. When he comes, he will explain everything to us.” Then Jesus declared, “I, the one speaking to you—I am he.”

2. What did Jesus ask the woman to give to him?

A: He wanted a drink of water.

3. What kind of water did Jesus talk about to the woman?

4. How many husbands had the woman had?

A: She had had five husbands.

5. Where did the Samaritans worship God?

A: On a mountain.

John the gospel writer must have considered this story to be very important. It’s the longest conversation that Jesus has with anyone in scripture.

First, Jesus breaks down all the barriers between the Samaritan woman and him and then reveals to her that he is the Messiah.

Barrier 1 Gender: Women had lots of limits at that time in history. No woman could be taught by a rabbi. A woman couldn’t associate with a man who wasn’t part of her family. Picture the disciples’ reaction when they returned and were surprised to find Jesus talking with a woman.

Barrier 2 Culture: Jews and Samaritans did not get along. They did share religious history; both believed in the God of Abraham, Isaac and Jacob, but they disagreed about how and where to worship God. The Jews saw the Samaritans as the people God rejected. Their hatred went so far that Jews were forbidden to touch and use the same utensils that Samaritan used, and that’s why the woman was so surprised when Jesus asked for a drink from her water jug.

Barrier 3 Social: With her water jug, the woman came to the well at noon. Why did she do this daily chore when her fellow townspeople would be resting during the hottest point of the day? She didn’t expect others to be there. She came alone.

Barriers Broken: But there in broad daylight and hot sun, the woman talked to Jesus the rabbi about the biggest division between Jews and Samaritans. With a growing excitement, she talked about the Messiah that everyone waited for. Could Jesus be the Messiah?

Jesus told her that a time was coming when true worshipers would unite and worship God together in the Spirit and in truth.

Jesus then told her that he was the Messiah.

And just like the Christmas shepherds and the fishermen disciples, excitedly she left her water jug behind and became the first evangelist to the Gentiles.

Want to dig deeper and learn more about how God calls unexpected people? Reread the whole conversation and what came after in John 4: 1-42. As you read, look for the barriers and see how Jesus broke down every expectation when he started a conversation.

Look to have a conversation that breaks down barriers. Pray about it. Talk to your parents and move ahead. 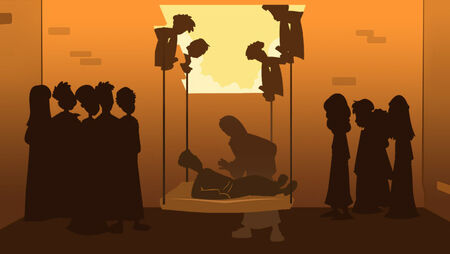