Theme: We are God's hands and feet.

2. People may think servants do not do important work. But anyone can be a part of God’s plan. That’s just what happened to Abraham’s servant in Genesis 24. God had promised to make Abraham’s descendants as numerous as the stars in the sky, but Abraham only had one son, Isaac, and he wasn’t even married. Abraham was too old to travel, so he sent his servant to a far-off land. Abraham told his servant that God would show him the right woman to be a wife for Isaac. The servant prayed and trusted God, and God brought Rebekah to him! She was just the woman God had chosen to help keep his promise to Abraham. We do not know the servant’s name. But his courage and faith made him a part of God’s plan. As you listen to today’s episode, think of small ways that you serve others. Could you be a part of God’s big plan too?

1. At the beginning of the story, why is Liz so upset with the waitress?

A: After a long wait, she got the drink orders all wrong, and she forgot Liz's order.

2. Which  famous book series do Julia and the girls discuss?

A: The Narnia series.

3. In which two competitions do Chamy and Cole participate?

A: Archery and sword fighting.

4. Why does Chamy think that Lucille deserves the seat of honor?

A: She stayed in character the whole time, carried armor, gave a cold drink when needed, and gave good advice and encouragement. She was a very humble servant.

5. What does Liz realize as he is yelling at the waitress?

A: He sees that she is being a servant, just as Liz was a servant to Cole. Liz was treating her badly, just as Cole treated him badly.

In this episode, Liz learns what it takes to be a good servant, and also how to treat others who are serving. He learns that he can be a servant to everyone.

Bonus Challenge: Read the Narnia books by C.S. Lewis that Julia and Lucille were discussing! You can start with The Lion, the Witch, and the Wardrobe. 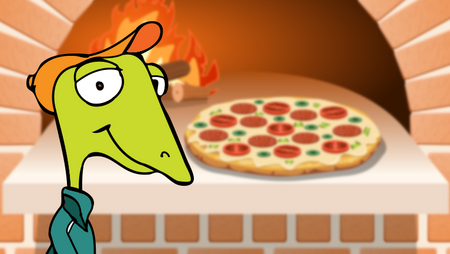