2. If you have ever struggled with not feeling content, then you should meet Saul who later changed his name to Paul. You can read his story in the New Testament book of Acts 9-28. Saul was a well-educated Roman citizen and had everything going for him. But that wasn’t enough. He still wasn’t content. After Jesus’ life on earth, his believers told his story to everyone. Jewish officials did not like this. They even arrested one of Jesus’ believers, Stephen and condemned him to die. The Bible says that Saul held everyone's coats, as men threw rocks at Stephen until he died. Saul decided that it would be his job to find Christians and kill them. One day on his way to the city of Damascus, suddenly, Jesus appeared to Saul and Saul’s life was changed! For the rest of his life, Paul was content. Whether he was at home or far away...walking or traveling on a ship...living in a tent or on an island after being shipwrecked......in prison or in a living room... with Jesus in his heart, Paul was always content. Think about Paul’s contentment as you listen to today’s episode.

“I have learned the secret of being content no matter what happens. . . I can do everything by the power of Christ. He gives me strength”

1. Why did the Trapper’s wife end up living in a mud hole?

A: Because she was never satisfied.

2. What made Herculiz look for work?

A: He wanted to do something else besides grow vegetables.

3. What kind of work did Herculiz end up doing?

A: After trying different things he realized that he didn’t want to change after all—so he went back to growing vegetables.

In this episode, Liz and the gang perform plays showing that it isn’t easy to be content all the time. Having inner peace “no matter what happens” means trusting that God is working through your circumstance and will provide for all your needs. Often times you may want things that others have or there may be things happening in your life that are beyond your control. So how do you remain content? First of all, like Paul, you can remember God’s faithfulness. Paul remained content and remembered “I can do everything by the power of Christ” (Philippians 4:12-13). A second key to being content is to remain grateful. When you spend time being grateful for what God has given you, it changes your perspective. You think more and more about all the things God has given you and less about what you don’t have. God challenges you to be content.

Make a thankfulness jar for your family. Whenever you think of something you are thankful for, write it on a piece of paper, and place it in the jar. Take some time every few weeks to check the thankfulness jar. Together, read the pieces of paper. These messages of thankfulness can be great reminders of God's goodness to you and to your family. 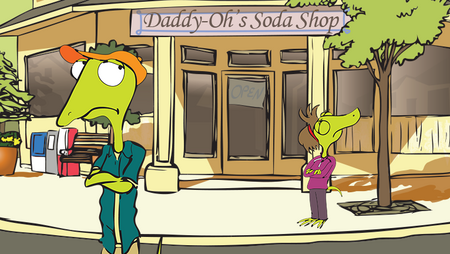 Who Needs A Best Friend?