Theme: God's got you covered.

1. Ephesians 2:10 says that we are God’s handiwork and that he created us for a purpose—to do good works. What are some good works that you think God created you to do?

2. Exodus 2:1-10 tells the story of a Jewish baby named Moses. This baby’s father was a priest, so his son would probably be a priest. But Pharaoh, the king of Egypt, made a law that all Jewish babies had to be killed. Moses’s mother put him in a basket and hid him in the reeds along the river. Pharaoh’s daughter found the baby and raised him as her own son. As Pharaoh’s grandson, it’s possible that Moses might have grown up to be the next king. But when he became an adult, he killed an Egyptian and had to run away to another country. There he became a shepherd. Years later, God picked him to be the leader of the entire Jewish nation. Moses must have often thought back to what he might have been—priest, king, shepherd—but God had another plan for him all along. As you listen to this episode, think about how comforting it is to know that God has a plan for you.

“For we are God’s handiwork, created in Christ Jesus to do good works, which God prepared in advance for us to do.”

1. What was the result of Cole’s career test?

2. What two tasks did Spike fail at?

3. What happened when Spike tried to be an umpire?

A: He threw everyone out of the game and then left.

4. What does Liz want to do when he’s older?

A: Play basketball in the LBA.

5. What word did Grandpa Anole say some Bible versions use for “handiwork”?

In this episode, Spike is upset because his career skills test came back blank. He worries about his future, but before long, he discovers that even he has talents God can use.

Your life probably won’t be as dramatic as Moses’s life was. You probably weren’t put in a basket and discovered by a king’s daughter. And you might never become the ruler of a large nation. But God created you for a purpose. He wants you to do good works that honor Him (Colossians 3:23-24).

God has given everyone gifts and abilities. He compares the church to a body. All of the parts of your body do different things. If you try to see with your big toe, it isn’t going to work well. If your ear decides to be your stomach, there will be problems. But if all the parts do what they’re supposed to, your body works well. It’s the same with the church. If everyone does their own job, using their own gifts and abilities, it works well.

Think of one thing that you’re really good at. Maybe it’s drawing or figuring out computers or singing or making other people feel comfortable. Talk to your parents and your pastor or another leader in your church and ask for ways you can use what you’re good at to help out. You might not know what you’ll do when you’re older, but you’re old enough to do good works that help the church and honor the Lord. 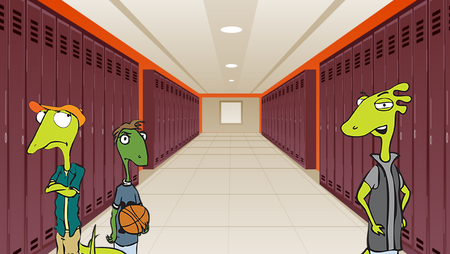 There's An Ape for That