2. In Acts 16:22-30, Paul and Silas were in prison. They had been stripped naked, beaten with rods, and thrown into jail. And that’s not all. They were put in an inner cell, where it was dark and probably cold, and had their feet put into stocks so they couldn’t move around. Guards were placed over them to keep them from escaping. But Paul and Silas didn’t forget their “neighbors”—the other prisoners and the guards. They prayed and sang songs, and the other prisoners were listening to them. Suddenly, there was an earthquake. The prison doors flew open and all their chains fell off. The head jailer thought they had run away, and was about to kill himself to avoid the punishment for letting prisoners escape. But Paul called to him and told him they were still there. Because of their love, they had a chance to tell him how to be saved. As you listen to this episode, think of what it means to show love to those around you.

“Love your neighbor as yourself”

1. Why did the kids have time off from school?

A: The school roof needed repairs.

2. What did they decide to do with their free time?

A: Collect food for the Community Shelter.

3. Who gave them a hard time about this?

A: Skink and Mr. Grouchenburg.

4. What did the kids do for Mr. Grouchenburg?

A: They baked cookies for him and prayed for him.

In this episode, Liz and Lucille learn how to love their neighbors, even when the neighbors are acting in a way that’s hard to love.

One day, Jesus was teaching a group of people about God’s law that says, “Love the Lord your God with all your heart . . . and love your neighbor as yourself” (Luke 10:27). One man asked him, “And who is my neighbor?” Jesus told the parable of the good Samaritan, about a man who helped a stranger who had been beaten by robbers. Jesus explained that a neighbor is anyone you have a chance to show love to. And then he said, “Go and do likewise.” This isn’t something Jesus just tells us to do. It’s what he did for us, too. Romans 5:10 tells us that Jesus Christ died on the cross for us “while we were God’s enemies”! That’s the kind of love he wants us to show others.

As Liz and his friends did in this episode, help out with a food or clothing drive. Find a local charity or business that is collecting food or used clothes for a shelter or orphanage. Ask how you can help—by going door-to-door with your family or a group from your church, helping organize the donations, serving at a meal. All the people you help are your neighbors, and you will be showing the love of Jesus Christ to them. 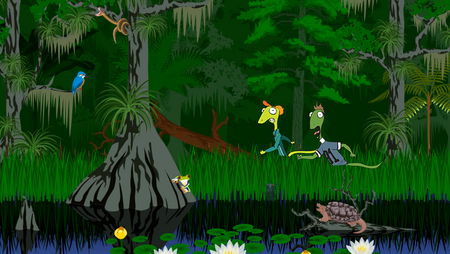 I've Got A Secret