1. Proverbs 11:13 talks about a trustworthy person. When we’re worthy, it means we deserve something from others. What is trust? What sort of things do we have to do to be worthy of someone’s trust?

2. God chose David to be the next king of Israel. But King Saul wanted to stay king. He was jealous of David and tried to kill him. In 1 Samuel 23:14, David was hiding in the desert wilderness near a place called Horesh. Saul looked for him everywhere but couldn’t find him. Saul’s son, Jonathan, knew where David was. He went to Horesh and met with David. Jonathan told David not to be afraid because God would protect him. The two friends made a covenant of friendship. Jonathan then went back to his father’s army, but he kept his secret. He never told Saul where to find David because he knew that David was God’s chosen king. Even though Jonathan loved his father and was loyal to him, he knew this was a secret he should keep. As you listen to this episode, think about what it means to keep a secret.

“A trustworthy person keeps a secret”

1. What was Liz supposed to keep secret?

2. What was Lucille’s secret?

A: Her dad was considering a new job.

3. What secret did Lucille promise not to tell?

A: That Liz and Spike were going fishing in Dead Lizard Swamp.

4. Why didn’t Lucille keep this secret?

A: She was worried that Liz and Spike would get hurt.

In this episode, Liz keeps a secret about a party, but Lucille tells secrets about her dad and about Liz.

Sometimes, others tell us things that they don’t want anyone else to know. And sometimes we find out things we’re not even supposed to know. If we tell these things to other people, we are gossipping. Proverbs 11:13 says that “a gossip betrays a confidence.” That means that we aren’t worthy of having someone trust us. The secrets we tell can get others in trouble or cause them a lot of hurt.

But what if we find out that someone is about to do something wrong or that someone is in danger? Is it OK to tell that secret? In John 13:34, Jesus says that we should “love one another.” To know whether or not you should tell a secret, you should think about why you want to tell it. Are you telling it to help the person because you love them and are worried they will do something bad? Or are you telling just to gossip and get the other person in trouble?

Are you keeping any secrets from friends? Think about what kind of secrets they are. Will telling their secrets hurt them or help them? Always be someone that others can trust. But don’t let people get hurt either. If you know a secret about a friend doing something wrong, talk to that friend and tell him or her to stop or you will tell — not to be mean, but the help them stop doing wrong. And don’t tell everyone. Just tell an adult who can help your friend. 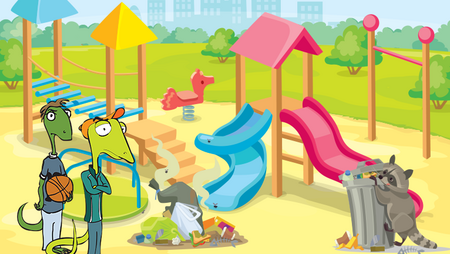 Bayou to the Future