1. James 3:5 says, “Likewise the tongue is a small part of the body, but it makes great boasts. Consider what a great forest is set on fire by a small spark.” Have you ever made up a story about someone and then felt bad about it later?

2. In Joshua 7, you can read the story of a man named Achan. He was one of the Israelites who helped conquer Jericho. Achan disobeyed God by keeping some of the treasure from Jericho for himself, then lied about it to cover up his sin. God punished Achan severely because he hates dishonesty. Think about how being dishonest hurts God, others, and you as you listen to today’s program.

“Likewise the tongue is a small part of the body, but it makes great boasts. Consider what a great forest is set on fire by a small spark”

1. What is the name of the group that Lucille is studying for her social studies project?

A: The Black Adders motorcycle gang

2. Who did she find listed as a member?

3. Who is in prison for the fire that killed Mr. Squamata?

A: Charles, a member of the Black Adders

4. What is the key to telling Grandpa Anole and his twin brother Johnny apart?

A: A small scar on Johnny’s face

In this episode, Liz and Lucille find out that someone has been accused of doing something they didn’t do. Have you ever committed murder? Probably not. But in a way, we all have—with our tongues. What you say to or about someone can destroy a person's life. Your words can permanently damage someone’s reputation. They can cause people to suffer for things they didn’t do. . They can take away a person’s motivation to work hard and accomplish the things he or she is gifted and called to do. In this episode, Charles lost 30 years of his life because of a lie, and because people gossiped about him, destroying his reputation and his life.

Sometimes you might be drawn into gossip about a person because it’s a way to belong, to connect with others. It often seems easier to be negative than positive. But when we keep a tight rein on our tongues, we not only keep ourselves from hurting others, we please God, and we witness to others about walking God's way (see James 1:26-27).

Read James 3:3-12 during your devotions. Talk with your family about the word pictures James uses here—a bit in a horse’s mouth, a big ship steered by a small rudder, a forest set on fire by a spark, a small part of the body that corrupts the whole body. The tongue is tricky: It can produce both good and evil. Who can tame the tongue? No person can—only God!

For one whole day avoid saying anything negative about people; only say good things. Remember, “If you can't say something nice, it's better to say nothing at all.” 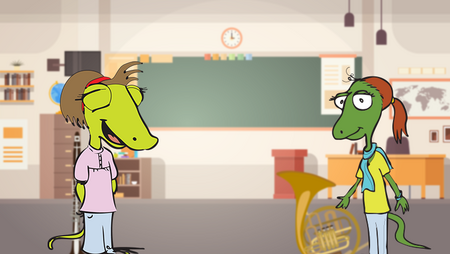