Theme: Playing by the rules.

1. 2 Timothy 2:5 talks about competing like an athlete. Have you ever cheated in a game or sport? Did you win? How did it make you feel?

2. In Malachi 1:6-12, God gives a stern warning about cheating. Instead of giving God the best animals for sacrifice (something he had told them to do), the people of Israel brought sick animals and kept the best for themselves. The priests knew the animals were sick, but sacrificed them anyway. God is not fooled by our cheating. He gives us rules to follow to glorify him. As you listen to this episode, think about how following rules could bring glory to God.

A: No one takes him seriously.

2. How does he intend to solve his problem?

A: By defeating Liz in the go-cart race.

3. Who helps Scooter get his go-kart ready for the race?

4. What plan does Liz make with Spike?

A: Spike will try to force Scooter to crash his car during the race.

5. What happens to Scooter’s Uncle Pip?

A: He gets caught cheating in a professional race and loses his prize.

In today’s episode, Scooter and Liz both want to win so badly, they are willing to cheat.

In Joshua 6, God gave the people of Israel some pretty crazy rules to follow to defeat the city of Jericho. They had to be wondering what God was doing … but they followed the rules exactly, and God gave them the victory! After the battle, God wanted the people to continue to trust him to provide for their needs. He told the people to offer the best of the city to him as thanks for the victory.

But in Joshua 7, we see someone who loved treasure more than he loved God. A man named Achan took a beautiful robe and some gold for himself, and hid it under his tent.

Now, God knew exactly what Achan had taken and where it was hidden. So God refused to give Israel any more victories until Achan’s disobedience was handled. Joshua, the leader of Israel, had each family come before him. When Achan’s family stood before Joshua, God told Joshua that Achan stole the robe. Achan admitted his secret, and he and his entire family were punished with death.

When you want something badly, it’s tempting to take matters into your own hands—but cheating shows that you don’t trust God enough to follow the rules. Playing by the rules means you can give glory to God for your victories!

Playing by the rules means acting fairly or “justly.” God had a lot to say to his people about acting justly. Explore some of them in Deuteronomy 16:20, Psalm 33:5, and Proverbs 21:15.

Is there some way that you have cheated recently? Confess your sin to God. Make it right with the other person as well. Try again, and follow the rules this time. 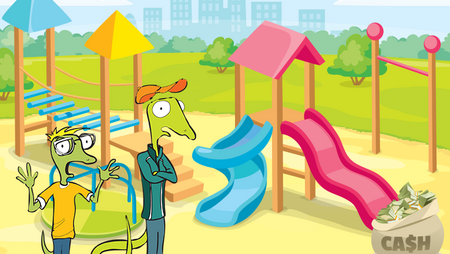